In the world of Battle Through the Heavens, there exists flames given birth by natural forces, known as Heavenly Flames((异火). From the original Chinese characters,this should have been translated to different or abnormal flames. These Heavenly Flames are incredibly powerful, much stronger than flames created with Dou Qi, and when used by receptariers, can help to increase the effect of the pills created. However, these Heavenly Flames are extremely wild and explosive, not to mention extremely rare, so even if one encounters an Heavenly Flame, it is still extremely difficult to absorb and control it.

When a Heavenly Flame is present, all other flames fear and follow it because they are the kings of flames and all other flames naturally serve it. Heavenly Flames are formed through the slow accumulation of the world's Heavenly and tend to have their own unique shapes. For example, The Blue Lotus Geocentric Flame is shaped like a lotus. What's rarer is that a few Heavenly Flames will possess emotions and intelligence! The flame that possesses wisdom is known as a Flame Spirit! Its intelligence is comparable to High-Class Magical Beasts that can shape-shift into a human form!

The second type was to inherit a ‘Heavenly Flame’ This kind of ‘Heavenly Flame’ inheritance similarly required one to pay a hefty price. For example, the source of the ‘Skyfire Three Mysterious Change’ that Xiao Yan practiced: the ‘Burning Flame Valley’, which was renowned from how they played with fire, had a kind of ‘Heavenly Flame’ which was inherited. This type of ‘Heavenly Flame’ was something that only the Valley Leader had the right to inherit. They passed it from one generation to another in this manner and this became the strongest protection measure of the sect. However, after this kind of inheritance, when the previous leader passed it over to the next leader, the strength of the former would decline by more than half. Should one not be careful, there was even the chance of one’s life being at risk. This kind of matter was basically something not uncommon during the inheritance in the ‘Burning Flame Valley’.

These two methods to transfer the ‘Heavenly Flame’ were commonly used in the continent. Most of the experts whose strength had reached a certain level would be able to know a little about it.[3]

There are currently 23 known Essence Flames, each equally as wild and explosive.

User:   Tou She Ancient God and later, Xiao Yan who receives the direct inheritance from Tou She.

Appearance: A man dressed in black covered in runes with pure black eyes that have no sclera.

Ability: This flame also known as the Nihility Devouring Flame was born in nothingness, and has no appearance to be seen and no form to be grasped. This Ethereal Swallowing Flame is highly mysterious, and is said to be able to devour the heavens and the skies, and possess the ability to swallow all things. There are only a few things in existence that can resist its ravenous devouring.

Note: This flame formed a flame spirit and is capable of fighting the clan head of the Gu Clan, Gu Yuan. It is strong enough to swallow an entire realm created by a Dou Sheng and defeat the soul fragment of the Yao clan Dou Di.

Note: The first flame they encountered became a flame spirit that was sealed by the previous holder and was very aggressive towards everyone. The flame spirit gained the techniques of the Purifying Lotus Demon Saint and is able to use Dou Skills and formations.

Ability: Though not as mysterious as the Purifying Lotus Demon Flame, it still has quite the reputation, for this flame is passed down through generations within the Gu Clan, and very few people have the ability to control it. The Golden Emperor Sky Burning Flame is able to even incinerate Dou Qi. Legends say that the first user of this flame, when unleashing its power, was able to instantly burn down a spatial realm made by a Dou Sheng.

Ability: This flame is highly strange, for most Heavenly Flames are pervaded with the power of destruction, but the Living Spirits Flame, instead of displaying destructiveness, is instead famous for its power of life. The steam produced by this flame helps to accelerate the growth of magical herbs, and it is said that if one tosses some seeds into this flame, those seeds would quickly germinate and grow. In other words, with this flame, one would no longer need to search for any herbs, and would be able to get boundless amounts of ingredients with just seeds.

This Living Spirits Flame is also known as the Flame of Longevity, for any person who obtains this flame would get a lifespan comparable to that of those beasts which are famous for their long lifespan. The only flaw of this flame is that this flame is not very suitable for combat, thus it does little to increment one's battle strength.

Location: Yan Clan (One of the eight Ancient Clans)

Ability: Strongest flame possessed by the Yan Clan. Can transform into wings with a wingspan of over 300 metres, and is extremely domineering.

Ability: Has already been fused with Volcanic Stone Flame to create a new Heavenly Flame, and the created flame is able to fight against the Golden Emperor Sky Burning Flame on equal grounds.

Ability: Not much is known about its ability, just that this flame is pretty enchanting and that a red lotus forms within its flames.

Location: Born within the stars, later trapped by Pill Tower

Ability: The Three Thousand Star Fire Flame is born within the stars, and is able to absorb starlight to grow stronger. When this flame is formed, silver fire descends from the sky, and the land within thousands of miles would be just like a desert, with no differentiation between day and night, for the stars won't show, and the sun won't rise.

As this flame lives within the stars, and is difficult to be found, thus this flame would normally exist for longer periods of time as compared to other Heavenly Flames. This is also why most Three Thousand Star Fire Flames found would have its own emotions and intelligence, and is highly difficult to capture. This flame also possesses the ability of "Three Thousand Star Physique", granting its owners immense recovery powers, allowing them to have what is widely known as "undying bodies".

The effect of self-healing will only activate if the user is conscious. It’s found in the Pill Tower.

Ability: This flame gives off a strange sound which can affect people's mentalities and emotions, causing them to feel irritated.

Ability: It has cold attributes along with extreme heat making it more dangerous.

Ability: a dragon’s might gathered in the Heavenly Flame. Hence, it possesses the miraculous effect of shocking one’s soul.

Note: Burning Flame Valley has placed a special seal on their flame to ensure no outsiders can use it and that it can be safely passed on within their sect.

Ability: Refines soul and accelerates Dou Qi training. On a higher level, this Heavenly flame is a good way to wipe out weaker opponents with little or no effort, also anti-soul forms. It also has the ability to make the Dou Qi denser. However after the Dou Qi is refined by the Fallen Heart Flame, the Dou Qi will carry Flame Poison which will make the person who absorbs the Dou Qi incredibly sick. Only a person that has a Heavenly flame can protect the person from Flame Poison.

Appearance: It appears to be a sea green flame. In Novel: Ocean Blue

Ability: Unknown, ability was not stated but it is assumed that it can overpower lower ranked Heavenly flames.

Appearance: Originally in the form of a Green Lotus, after absorption it appears to be a green flame.

Ability: In the novel, it was mentioned that this flame is capable of causing volcanic eruption, though this ability was never used. The color of the flame is Green in the novel rather than Blue as it is shown in the Manhua.

the volcanic eruption ability is amplified by a dou technique that xiao yan acquires later on and gets the ability to create a silent pillar of lava under his opponents or anywhere he wishes to.

“‘Green Lotus Core Flame’ is nineteenth on the ‘Heavenly Flame’ ranking. It is formed deep underground and has experienced the polishing, fusion, pressure, and carving from the planet’s flame… It forms a spirit in ten years, takes shape in a hundred years and turns into a lotus in a thousand years. When it is completely formed, its color would slant toward the greenish side and the lotus core would form a cluster of green flame, named as “Green Lotus Flame’ or ‘Green Lotus Core Flame’. The strength of this flame is unpredictable. When it is near volcanoes, it can cause volcanoes to erupt, forming a mayira; destructive strength. 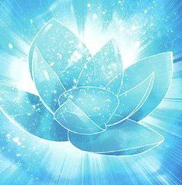 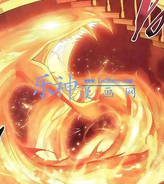 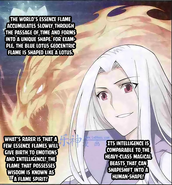 Add a photo to this gallery

Retrieved from "https://battle-through-the-heavens.fandom.com/wiki/Heavenly_Flames?oldid=23537"
Community content is available under CC-BY-SA unless otherwise noted.